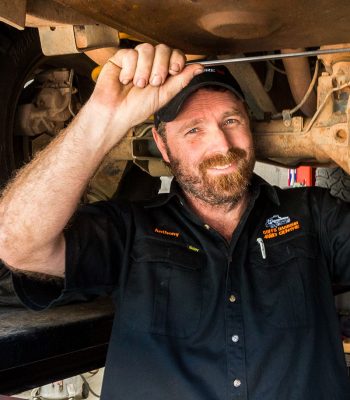 Anthony’s family holidays growing up were always in the back of a Land Rover and involved many varied trips around Australia with the family. Anthony has continued that adventurous lifestyle of camping and 4wdriving throughout his life.

Anthony did his automotive apprenticeship with a leading Land Rover dealership in Sydney where he grew up, staying with Garthon Land Rover for several years.

Anthony then travelled around Australia himself after leaving Sydney for a few years. Working along the way at ARB in Darwin before becoming a Transport Inspector for the NT Government and heading south to Alice Springs. Not wanting to miss out on anymore of Australia he travelled across the Kimberly’s onto Broome where he worked as a Marine Engineer for Paspaley Pearls varying his mechanical skills in a marine environment. Further south in Margaret River Anthony was a machine supervisor for a major vineyard.

In 2005 he then became involved with an eclectic bunch of veteran car enthusiasts who recreated the Great 1907 Peking to Paris Race taking 60 days to cover 16,000km in 100 year old cars combining the ultimate, adventure and motor mechanics.

Anthony settled in Coffs Harbour in 2006 and purchased Coffs Harbour 4wd Centre a long established business that had closed its doors a few years before and has made it the successful business it is today.